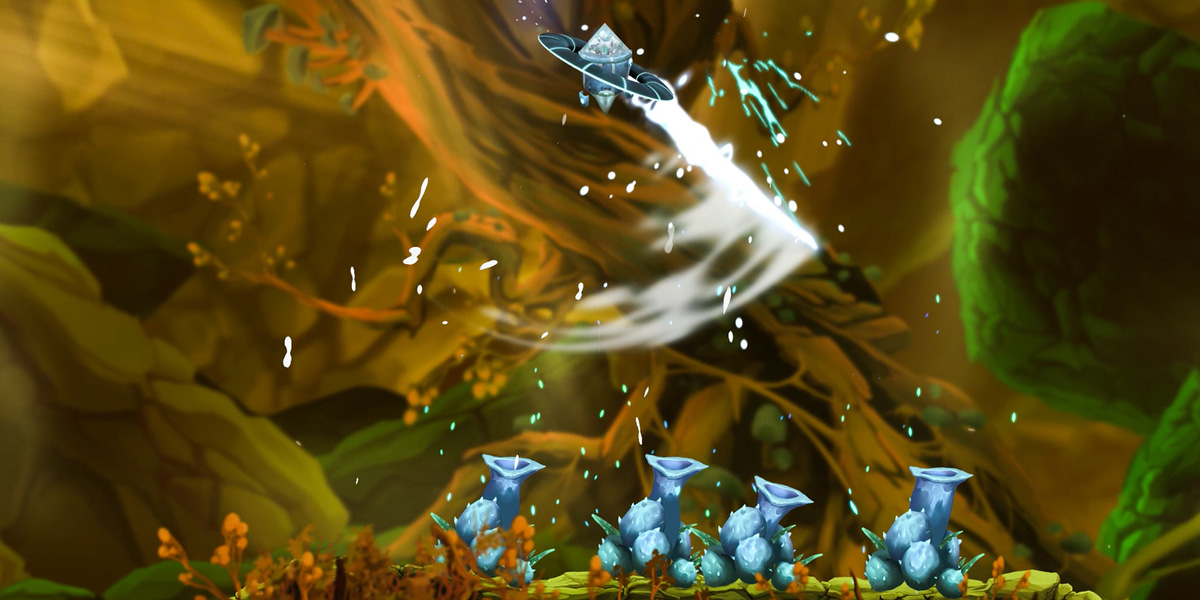 In the earliest days of Lander civilization, the landers themselves were primitive folk, humbled and in balance with the cosmic nature of things.

Long before technology, spaceships, interstellar travel and universal truths, The Landers discovered milk in its purest form – The Ancient Mighty Cows! No one knew where and when the first contact was made, but the fated meeting between the two species was a fact.

And so the Landers started harnessing the cosmic milk, and in the process – manipulate it with willpower and wisdom alone. 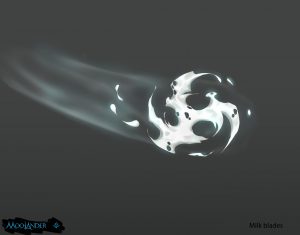 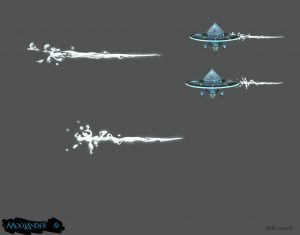 The players in Moo Lander have three different types of abilities to choose from when progressing the game. These are the Lethal Attacks, the Non-Lethal Attacks and the Defensive Abilities. The first two are, as implied, attacks to fight enemies with. The third type is purely defensive – think of them as the main means to your survival during the harsh adventures in Moo Lander.

The lethal attacks are used against various flora and fauna throughout the world of Moo Lander – creatures such as the Edgehog, the Spawner Plants, the Flying Shooter, the Worms, etc. There are nine of these weapons in total.

The non-lethal attacks are made specially for taming the Ancient Mighty Cows, as they must not be harmed in order to be beamed back to your home planet. These attacks are three in number and if used against common enemies, they only stun a target.

The defensive abilities are also three and are used only for defense as well as mitigating attacks or deflecting projectiles.

At any given time, the player may equipt one defensive ability of a kind, one lethal attack and one non-lethal attack. Each of these is unlocked through leveling up and buying the chosen ability with the milk resource. In addition, every ability (defensive or offensive) can be upgraded once for maximum efficiency. The upgrades are also unlocked through leveling up and purchasable with milk.

Let’s review all of the abovementioned abilities and attacks, starting with:

One of the few non milk-based technologies of the Landers, the defense drones are the perfect example of the saying – “the best defense is a good offense”.

These little mechanical critters hover around the Lander’s ship and activate at the slightest trace of danger. When this happens, they lunge themselves at any projectile and stop it, being destroyed in the process.

Their own mini-AI is a variation of Hamilton, so every time the drones spawn around the ship, they synchronize themselves with your own master AI.

Mimicking the cows’ powerful mooing wave, The Lander use a simplified version of this sound pushing ability. By creating a massive sound barrier and pushing it forward, they shield themselves from incoming projectiles, lifeforms or natural disasters of all kinds. This is a perfect example of preemptively avoiding future harm, something that The Landers pride themselves on.

By focusing milk particles in a single small area in front of the Lander’s spaceship, a shield is formed. This shield is almost indestructible, but requires a steady stream of milk to replenish the particles forming it. Landers use it to protect themselves from harsh environmental hazards and creatures without having to harm the local flora and fauna. Some projectiles can even bounce back off the shield instead of being absorbed by it.

Primary weapon system of The Landers – a simple milk bullet, fired automatically through a common barrel inside the ship. Quite crude, fast and effective.

The Machinegun is a crude and brute weapon, but quite effective in its display. It heats milk to high temperatures, then fires small projectiles at amazing speed. The burst of heated milk shards is the perfect bullet storm for defeating enemies in large numbers fast.

“One question always stands when it comes to the milk-powered machinegun – do the means really justify the ends?”

Sometimes, technology can get too far, and that’s true for milk-based technology as well. Pushing the limits of the milk particles, The Landers discovered some peculiar subatomic behavior of this white material. Just before critical mass, when bombarded with tachyons, these milk particles become extremely chaotic, but not unstable. Thus, they can be used as a weapon able to be controlled or calibrated.

The resulting implementation became known as “Sparks” – milk projectiles that shoot in a wide range around a Lander’s ship. The trajectory is totally random – including speed as well as enemy lock on. The Sparks always hit living organisms, no matter what.

When The Landers first started to experiment with milk on a subatomic level, they discovered а close similarity to photons and their properties. After several failed attempts, the milk Sages managed to create a device which uses exactly these photon-like properties. Strictly speaking, it was a highly focused beam of milk energy, almost identical to lasers. They called the device – “The M Laser” where the “M” stands for the mayhem class level of the weapon.

„Do not mistake our good will for weakness, lest you know our final mercy, which we call “mayhem”!

– Lander Spiro, of the High Sages

The greatest achievement in the field of milk weaponry is not the Mooriken, but the Milk Saber! Landers found out that a strong willpower can harden milk into indestructible matter which can slice through anything and not fall to decay and destruction. And so the milksmiths used their minds to carve out a blade of pure milk, and they called it – “The Milk Saber”! Greatest of the milk-weapons at your fingertips.

Milk has a very specific critical mass, which achieved leads to a violent reaction, causing it to explode. The milk sages of the Landers know this fact and have devised the so-called “Milk Grenades”.

This weapon doesn’t look like a grenade itself, but rather a compressed super-dense mass of milk being hurled at any direction. After several seconds and upon impact with ground or other biological tissue, critical mass is achieved and an explosion follows.

One of the more aggressive arsenal choices, the Milk Grenade is a powerful usage of the milk and should be used carefully and with caution.

With the creation of The Milk Shield and The Milk Saber, the next logical step for The Landers was the implementation of Milk Arrows. This milk-based weapon resembles small arrows, or rather – bolts, with a specific trajectory in the form of an arc. When these milky stingers hit a target or a terrain, they explode in small radius after a delay. The perfect way for wide spread devastation through the power of milk!

The Milk Seeking Missile is actually a giant missile, powered by milk, as well as carrying an explosive milk payload which serves as its damage-dealer. This missile does not seek milk in enemies per se, but rather the large mass of milk is naturally drawn to hostile creatures that are a threat to the Lander.

How this peculiar mechanism of the missile itself works is still a mystery to the Landers.

“Heed the mystic power of the milk and fear it!”

The Landers learned how to concentrate the milk particles into high density single points in space, then release them with maximum velocity. The product of this process is shaped in the form of a milky white disc, spinning on its axis with incredible speed. The first of the Lander’s non-technological weapon – The Mooriken, would be later perfected using technology and implemented into their spaceships as a primary milk-based weapon.

This weapon technology is specially designed to subdue the Ancient Mighty Cows. It is not milk-based, as everything milky will not harm the cows. Using electricity manipulation, The Landers generate two positive charges that shoot forward. When in contact with these species, they weaken them, making the taming possible. If these charges hit a non-bovine lifeform, they electrify the nervous system, stunning the target. The Charge is not the strongest weapon against the Mighty Cows, but it can be aimed freely for optimum tactical use.

“Electricity is our best taming method, even against that one pesky sparkling one!”

A straight line of electric current is the name of the game when it comes to The Zapp. Non-lethal attack for weakening cows of all types, this weapon shoots down a wide beam of electricity, stunning all other lifeforms besides the cows themselves. The only drawback to the immense damage output is the slow windup of the charges – several seconds could mean the difference between a very angry cow and a completely tamed one!

Another special non-lethal attack, the emblematic Lander bombs are a sight to behold! Using special chemicals to mix a potent concoction, made into large canisters to explode on impact, The Landers use this weapon as the strongest means of taming the Mighty Cows. It is slow, only dropping linearly downwards, with minimal control over the projectile, the bombs greatly weaken every type of bovine lifeform. Drop several of these bad boys on top of a feisty cow, then just beam her up and save the day!